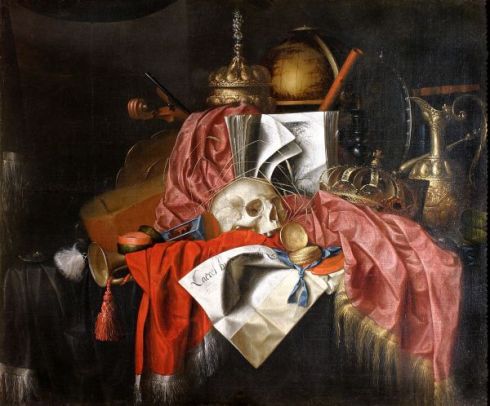 Vanitas/Still Life with a Skull, one of several by Franciscus Gysbrechts, mid-to-late 1600’s.
Image from Wikimedia Commons: http://upload.wikimedia.org/wikipedia/commons/1/12/Gysbrechts_Still_life_with_a_skull.jpg

I haven’t many of my own words, right now, which is why I haven’t been posting. What few words I do have are being channeled into fiction and a few friends and loved ones who are facing trouble and pain.

Three friends of a close friend of mine, all from the same family, were killed in a wreck. Serious illness and death have touched several people I love. There is death, illness, strain, pain, separation, abuse, stress, and frustration close at hand, and horrible violence, famine, illness, war and death not far distant.

In other words, everything is normal for the world.

It is easy to think, in relatively peaceful and prosperous countries, that we are safe, and in many ways, we are. It’s also easy to feel ashamed of that peace and safety, knowing so many do not have it. I keep asking myself what that shame means. Is it helpful or harmful, a tool or an attack? It shouldn’t mean that I want what little peace and prosperity there is, in the world, to vanish (or should it?) but that I do not want such things to be so isolated, so rare. Perhaps, so long as it makes me want to use what I have to help, then it is good, but if it paralyzes me with shame, it is evil.

But there is something to be learned about both peace and prosperity, for those who are in it: It is, in the end, no real protection. Pain and death will find us. If we delude ourselves into thinking otherwise, or in distracting ourselves until we forget, then we are in for a shock.

Different faiths have different perspectives on how this reality should be faced. In my own, Christianity, there are many different angles from which it is approached. There is no single answer, though some folks pretend that there is. There are no pat sayings that cover all angles, though some people like to pretend there are. There is, instead, a mosaic, with space between the tesserae.

Be careful what you say to pain. I have to remind myself of this. It’s too easy to forget, we are so desperate to say something, to help somehow, that we do damage. Better to be silent. After all, in silence the Spirit may have a chance to speak without all of our clutter. My mind is very cluttered… and I am certainly not silent, here. But then, what is this blog if not a place for me to vent? Maybe venting, here, will keep me from saying stupid things to someone anon.

The painting, above, is a vanitas, a reminder of mortality and of the ephemeral nature of earthly wealth, power, pleasure and wisdom. In this particular painting, the skull is wreathed in dried grass, a symbol of the brevity of life, and the hope of resurrection, as the grass dies every year, but returns every Spring. It is the only thing in the painting that is treated so. I think C. S. Lewis, in The Weight of Glory points out one reason why.

There are no ordinary people. You have never talked to a mere mortal. Nations, cultures, arts, civilizations – these are mortal, and their life is to ours as the life of a gnat. But it is immortals whom we joke with, work with, marry, snub and exploit – immortal horrors or everlasting splendors. This does not mean that we are to be perpetually solemn. We must play. But our merriment must be of that kind (and it is, in fact, the merriest kind) which exists between people who have, from the outset, taken each other seriously – no flippancy, no superiority, no presumption.

Growing up, especially while studying history and biology, I got a very different impression of the world. What is the life of a human, so brief and fragile, to the life of a nation, or the world, or the universe?

This is no answer to the question of pain and death, or at least, it is not a complete answer. But it does shift the perspective. If I believe that human’s are, in essence, immortal, then how I treat them becomes much more serious. The responsibility is immense. When we turn our backs on human suffering, we are turning our backs on the suffering of an eternal someone. In Weight of Glory, Lewis catches at a possible risk. A turnabout.

It may be possible for each to think too much of his own potential glory hereafter; it is hardly possible for him to think too often or too deeply about that of his neighbor. The load, or weight, or burden of my neighbor’s glory should be laid daily on my back, a load so heavy that only humility can carry it, and the backs of the proud will be broken.

How this post rambles! I’m not sure there is a point, or at least not a clear or singular one. I keep coming back to the vanitas. Almost all is vanity, born from dust and to dust returning, but if there is something eternal in that dust, which I believe, then the one thing that is not vanity is the immortal. The pain in my fellows, the suffering, may be finite, but I do not think it is trivial.