I am not good at record-keeping. That statement will make family and friends laugh because it is a huge understatement. Because of this, I am not sure what year the following image was taken. I know I was in college, and it was before my senior year, which means I was between 20 and 23. I will make a wild guess and say 21.

I loathe pictures of myself. For every one that looks like me, there are fifty in which I look like someone else or like a marshmallow with hair. No one in my immediate family is photogenic, though my father is better than the rest of us. The only reason this picture exists is because a professor required it. I was taking a basic photography class, and in his wisdom our prof required us to have at least one self-portrait per roll of film.

Yes. Film. That camera in my hands? That’s my baby. I haven’t used it in too long, something I intend to remedy, but it gives me a feeling of control I have never felt from using a digital camera. The image was taken with silver film, developed and printed by me.

So, why am I posting this? I turned 31 in February, marking around a decade since this picture was taken. This got me to thinking about the passage of time and what that means, and made me want to take another picture of myself now. And so I did. This time I used my father’s digital Nikon. I dressed, as closely as I could, in the same way. Here is the image in black and white, for comparison, and in color as it was originally. 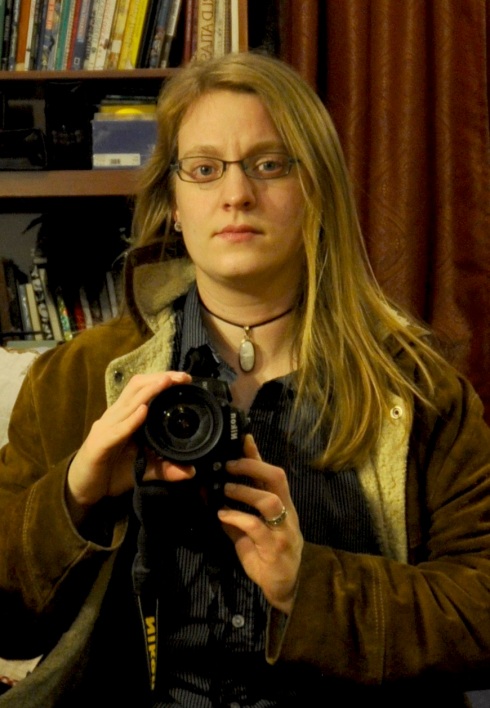 The shirt in the first picture has gone through a metamorphosis. It is now part of a quilted prayer-rug a good friend made for me.

The moonstone necklace around my neck now has a crack from side to side. Why? It was run over by a car on a gravel road in the Smoky Mountains.

The coat. Ah, the coat. That is my magic coat. It belonged to my father, and he gave it to me when I was in high-school. It is never too warm, but always warm enough, even when I was in Salzburg, Austria, on a snowy New Years Eve and someone poured vodka all over me. All that has changed about it, since the first picture, is that my cat, Geoffrey, managed to bite all the way through one sleeve. It’s thick leather, too, which makes me wonder about the strength of Geoffrey’s jaw.

The ring on my finger in the first image, though identical to the one in the other two, is not the same ring. The one I currently have is, if I am counting right, number 3. The first one was lost whilst gardening, and has never been found. The second one split, my active hands being tough on silver. The third, though scratched, is in good shape.

And then, of course, there is me. The creases between my eyes are deeper, but I had that long before I turned 21. The eyebrows drawn together in thought is an expression everyone who has met me will recognize. We even have pictures of baby-me with that expression.

I had glasses at 21, too, but I must have been experimenting with contacts when I took the first image. Contacts and I don’t get along. The rings, evident in all the pictures, have left a good callous on my hand. I worry, with the surgery ahead of me, that I will no longer be allowed to wear the ring on my right.

There is silver in my hair now! Just a few strands, so far. I like them.

I am a happier person now, than I was then. Depression has been my shadow for a long, long time, but it used to jerk me around a lot more. Time has softened that cycle, at least for now. I’ve grown and changed in thoughts, in faith, in experience. I still have respect for that 21-year-old who was me. She had come a long way from the 11-year-old me. Though I have changed a lot, she and I still have the same foundation, and pretty much the same orientation in the world. The biggest difference is what I have learned about myself and about the world that she did not know.

Most of all, I am struck by the complete strangeness and unpredictability of life. I mean, shirt-to-prayer-rug? Necklace run over by a car? And finding myself fighting cancer is far from the strangest thing that has happened between then and now.

My strongest feeling as I look at these images and think about the time in between?

It’s not nostalgia, or regret, or triumph. It’s simply awe. Awe that I have been alive for ten years since that time, and that so much has happened and not happened.

When I die, if I do so before the coming of my Lord, bury me in the sandy loam of the Smoky Mountains.

Golden sand worn from the peaks fills gaps between fallen leaves and makes  patterns in impatient creeks. Touch the stones, run the sand through your hand and you will hear them whisper in the language of mankind before the Tower of Babel, the tongue from before the breaking of words.

I have heard it said, usually by folks from the West where young, fractious mountains reach skywards, that the Smokies are too low, too unimpressive to be “real” mountains.  I can only laugh. Certainly the Rockies, the Cascades and their western siblings possess the energy and power of youth.  Just so, the Smokies once were young, volatile, and dramatic. In the way of all ancient things, they traded the glory of youth for the majesty of age.  Aeon echos in the hollows and the coves, and shows in the sand and on the smooth-worn stones. Mountains endure.

If slanting, many-hued boulders, chunks of quartz, caves and sand were all of the Smokies, the mountains would awe, but not renew me. Far from withering in their age, they are covered with life as with blizzard snows, layer on layer. As I walk, a hemlock tree dusts my shoulder, a pine rises, scaly and straight, and an  oak holds its branches, like frozen lightning, over me. Mosses and lichens coat stone and soil, save where mushrooms break through, or leaves lie too thick. A dogwood spangles the understory, answered by a partridgeberry creeping across the loam. Aster, firepink, trillium and indian-pipe hide around corners to surprise me, while dark rhododendrons and laurels weave their branches into nests for the ghost of Noah’s raven.

I can sit with my back against the fossils of the long-lost sea and watch an island colony of grasses and flowers thrive on a boulder mid-stream. Across the water, a low cliff recalls the violence that tore it from surrounding bedrock and left it tilted with its flank bare. That flank is veined with quartz and streaked with iron and coal. The gravel of the stream below looks like sunken treasure with rocks for gold and bronze and fish for silver and jewels. Then there are the dragonflies.

There are footprints of animals in the muddy places, feathers and bones here and there. Often enough, the creatures themselves can be seen, despite their wary quickness. The birds converse noisily and the streams are quietly full of life. I know of a place where an old truck lies moldering, doubtless used by log-poachers venturing into the park, and abandoned for reasons forgotten. There are bullet holes in the cab, but whether from target-practice or a shoot-out, who knows? The engine sits beside the truck, rusted and covered with leaves. There is a bird’s nest in the cavity of one headlight. 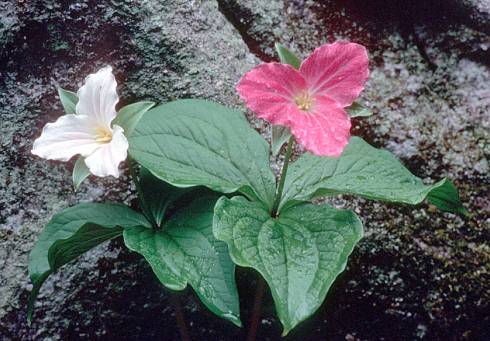 That is one part-hidden thing about the Smokies. Their history is interwoven loveliness and brutality. Human suffering has not been absent, nor the ravaging of beauty and plenty in ignorance or greed. Both have visited often, and visit still. The mountains shrug. The signs of anguish and destruction are assimilated. For all our destruction, even smashing the mountains’ heads with explosives (what crimes humans commit for profit), Time is on the mountains’ side. Perhaps their history is so long and deep that our short time on them encompasses only a few lines in a book of many volumes. Insignificant.

The mountains have a brutality all their own, the natural cruelty of the natural world. Their allure would shame Helen of Troy, their gentleness comforts many a forlorn heart, and their caprice has often broken and killed. Many believe that there are ghosts in the mountains. If so, there is good reason. Yet I love the mountains enough to haunt them myself, at least while I live.

There are secrets as closely hidden as ghosts. I have learned some, and shall never learn all.  In a certain season, under right conditions beneath the thick trees at night, the blue-ghost fireflies wake. They are will-o-the-wisps, faint points of steady, cold light drifting a foot or two above the forest floor.  I have seen them more than once, and every time I feel I am in a world between worlds and beyond time. 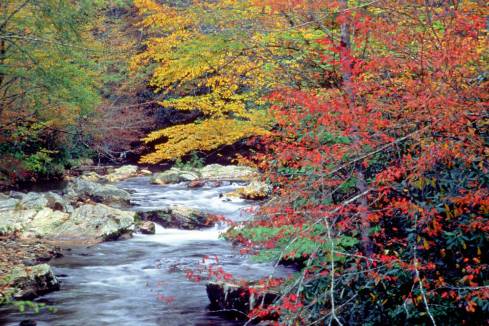 And then there is the world below, with graceful creatures born in profound darkness. Into narrow passages, muddy pits, cold depths and palaces of lonely glory, life has made its way. The mountains are so riddled with holes and running water that it is a wonder they stand. No one knows the full measure of those caverns, caves and chasms.

There are as many secrets of the light. Flowers, rarely seen, bloom along the high trails and in what remains of the old-growth forests. Trees with more character than the most colorful human are not difficult to find, nor are rock-faces that bend and buckle to make mosaics more fascinating than the Byzantines.  Salamanders in jewel-colors hide among the rocks and leaves. There are sheer walls thick with colonies of moss and flower, and streams that curve and tumble through labyrinthine channels in long-suffering boulders. I know a place where reindeer lichen and thick moss wage a quiet, endless war.  In short, there is no inch of sameness, no possibility of monotony.

Old and young are seamlessly interwoven in these mountains, and memory and present life merge.  But in the end, they are just mountains, aren’t they?