A Mistake to Run

By jubilare
Happy Halloween, folks!
This is a snippet that came to me a while back as I considered part-one of my WIP. Whether or not it will appear in the finished work, who knows! I changed the names because, well, I’m not sure, yet, whether or not I want this blog linked to the work itself. I am rather of a mind to finish my work, try and get it published, then be hands-off. But that is just how I feel now. Who knows how I will feel when, and if, the time comes?
Anyway, here it is! 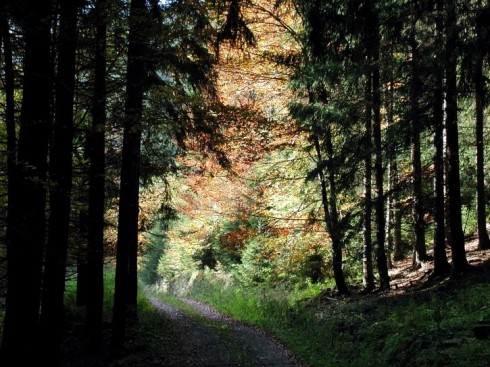 Source unknown. If you know where it is from, please inform me.

The crickets were singing. Aubry lay awake, enjoying their rise and fall as if he would not hear it again for months. So late in the season, there was no telling when the first frost would cut them short.

One trilled in the corner of the cabin. A “thump” below told Aubry that ma or pa had thrown something at it. The inside-cricket was silent for a short time, then he started up again.

Aubry sighed. It was cozy under the thick quilt with his newly-adopted brother, Egan, curled up like a squirrel at his back. The small loft window stood open, letting a trickle of cool air move over his face.

Since the death of his last sister, years  back, he had forgotten what it was like to have a bedfellow. The extra warmth, the sound of soft breathing, and the occasional elbow or cold foot jabbed into his side were, at least for now, welcome things.

Sleep came smoothly, and dreaming too, like changes in the sky where gray becomes salmon and gold, then purple, then a luminous dark blue, and blue-black, swift yet gradual.

A chill crept into Aubry’s back, near his shoulder. He shifted, and felt something round and hard against him, cold, like a stoneware jug from the springhouse. He rolled away and turned to look.

What lay on the pallet beside him, where Egan should have been, was a gray, greasy-looking skeleton, still bound with shriveled strands of flesh. With a nearly silent, strangled cry, Aubry shuffled backwards until he was against the wall, next to the ladder. As he started to climb down, the corpse moved, rubbing at the remains of its face as if to wipe away sleep. It made a dull sound of bone on bone.

Aubry froze as it sat up, empty sockets turned to him. Moonlight from the window outlined the angles of its wagging jaw. He slid down the ladder and pulled it away from the loft before the thing could try and follow. His parents’ bed was empty.

At the door, he glanced back to the loft and saw the skeleton kneeling at the edge.

The thought stung him unexpectedly, like the time he found Lily crying and realized that his teasing, along with the others, was the cause. But little Lily was pretty, when you really looked at her, and alive. The skeleton was cold and filthy, something that should be buried deep, or burned.

There had been a price to pay, learning to see Lily. He had gained a friend and a heartache, and found himself distanced from several of his oldest companions.

The skeleton clacked its jaws.

What’s the cost of this? To let it kill me?

It had no tongue, or throat, or eyes for expression. Just a blank grin. Only the tilt of its skull and it’s shriveled hands gripping the edge of the loft gave it character. Was it saying “I want to get down and kill you” or “Are you going to leave me here alone?”

The corpse dropped down onto its creaking ribcage and reached out the remains of its hands.

Aubry stared at it, then fumbled for the door behind him and, opening it, ran out into the night.

The fort was as silent as a picture, full of gray and nothing. No wind, no crickets.

“Bear!” He called his dog, but nothing shuffled under the porch. Behind the closed door came a creaking, scraping sound.

With a groan, Aubry leaped off the porch and ran down the common.  Even his footfalls were swallowed into silence as he ran, but the scraping at his cabin door echoed out behind him.  He was scarce strong enough to open the main gate, even with the winch, so he made for the eastern one.

When he reached it, he paused to listen. There was nothing, no creak or clatter, just thick, congealed quiet.

In the dark, he fumbled for the latch and found it locked. He wrestled with it, fighting like a raccoon in a cage. The lock gave way and he burst through the gate into gray, silent fields.

He ran, and ran, past the pine grove, past Dorwich farm, down to the ford at High-bend creek.  There, at last, was sound, but it murmured defeat. The creek was up, too high to cross.

For the first and last time, he turned to look back.

There was nothing in sight.

Trees swayed, but did not rustle, grass moved in soft waves, but he could not hear the wind.

He realized, as he watched the empty fields, that running had been a mistake. The thing could now be anywhere, doing anything. He might live his whole life looking over his shoulder, wondering.

Nothing. He backed away from the nearest tree, sat as close to the creek-bank as he dared, and tried to watch in all directions.

Then something grabbed and shook him. He lashed out, and someone caught his arm and smacked him across the face.

He startled awake. The waning moon was up and the shutters of the loft window were still open. He could see Egan kneeling beside him, holding his arm.

Aubry sat up, shivering, and rubbed his hands over his face. He looked over to see Egan’s crooked little smile.

“I get nightmares, too. Mostly that I’m still dyin in the shack and yall’re jus a dream.” He leaned towards the window and closed his eyes, taking in a deep breath. “If that happens t’ be so, I’d rather die dreamin.”

“I…” the fright was too near for Aubry to put it into words. He managed only “I dreamed you’as dead.”  That’s right, ain’t it? It was Egan. It was Egan, and I ran from ‘im ‘stead of tryin to help. Some brother that makes me.

Egan blinked at him.

“Boys?” Pa rumbled from down below. “Hush and get sleepin.”

“Yessir,” said Aubry. He patted Egan’s bony shoulder and lay down. Egan curled up and rested his shaved head against Aubry’s back. It was round and solid, but warm.

As Aubry drifted off to sleep, a chill moved over him, and brought him full awake. It was just a passing feeling, perhaps a  final shred of that horrible dream.

Just another tree in the proverbial forest. Look! I have leaves! END_OF_DOCUMENT_TOKEN_TO_BE_REPLACED
This entry was posted on Wednesday, October 29th, 2014 at 12:20 pm and tagged with 2014, Autumn, brothers, Colonial Setting, death, fiction, Halloween, nightmare, October, skeleton, Speculative fiction and posted in fiction, writing. You can follow any responses to this entry through the RSS 2.0 feed.
« Vanitas
A George MacDonald Quote »

10 responses to “A Mistake to Run”